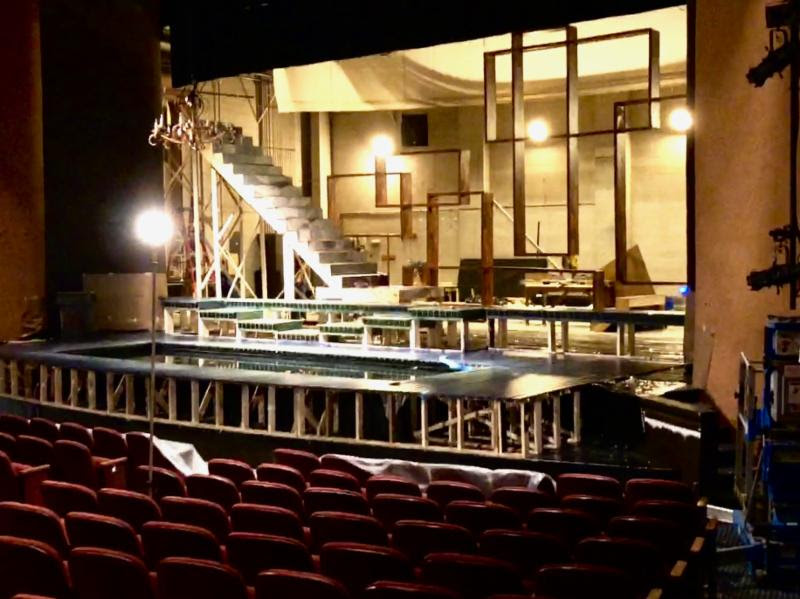 An exclusive look at the set in progress!
It’s like nothing you’ve ever seen before. Metamorphoses features a pool of water on stage. But this design feature isn’t just for looks. Actors interact with it throughout the entire production as it transforms with characters and myths from scene to scene.
Assistant director, Conor Wilson, explains: “The pool presents a fun challenge for every facet of the production process: how does an actor move in water, what costumes look and work well soaked in water, and simply how do you even begin to put a pool of water on a dry stage?” 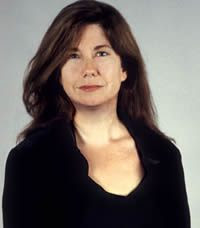 In a 2013 interview with DC Theatre Scene, Mary Zimmerman said regarding the importance of the pool to the production, “The whole idea of Metamorphoses had everything thing to do with water; it plays a role and can play a character. I think it’s because water is so changeable – it can be a solid, a liquid, or it could be steam. Water is also often a symbol of change. You can undergo “a sea change”; if an object is in water too long, it is either corrupted or purified; we speak of people crossing their Rubicon. Water is used in ritual, all over the world, to be the emblem of change. It’s the source of life, everything. It’s all around us and in us.
The text I chose out of all the possible myths are ones I felt I could see in the water, that benefit from the water, are amplified by the water, and the water means something in them.”

The added element of water changes the action on stage. Says Joan Gavaler,  “Usually you can’t go below floor level. Just the structure of how the pool is there on stage is giving us another dimension to move in and out of that you usually don’t have.”
William and Mary’s resident designer Matthew Allar is the mastermind behind the design and Brian Saxton, the production’s Technical Director, is working right along side him to ensure this challenge is met and completed!
Check out the Metamorphoses trailer below to learn more about how the pool functions in this William & Mary Production! 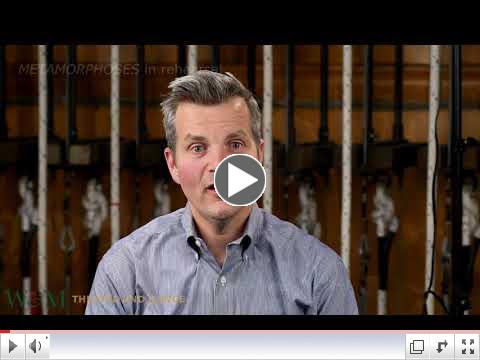 See if this production will sink or swim in Mary Zimmerman’s Metamorphoses
on Phi Beta Kappa Memorial Hall’s main stage
Feb. 22-25.
Ticket information Here
Want to enter to win tickets?  We are running a giveaway for 4 tickets to see Metamorphoses

Dept. of Theatre, Speech, and Dance As you can imagine, you don't want the red QR code. Our original interview with Jackie END_OF_DOCUMENT_TOKEN_TO_BE_REPLACED

Looking for things to do in the Williamsburg VA area this weekend? If so, "The Burg Weekender" our END_OF_DOCUMENT_TOKEN_TO_BE_REPLACED

Will a homemade face mask protect me? Should I sew a face mask and wear it? First of all, if END_OF_DOCUMENT_TOKEN_TO_BE_REPLACED

Now you can listen to archived live recordings of Virginia Symphony Orchestra concerts! During END_OF_DOCUMENT_TOKEN_TO_BE_REPLACED